The tokens & counters that bear the words “To Hanover” (commonly known as Cumberland Jacks) are usually found with Victoria’s portrait on the obverse and a figure riding a horse on the reverse (in the style of St George slaying the dragon). They were produced as satirical counters (I assume used for gaming).

The history behind these pieces is that when Victoria was crowned as Queen, she was unable to fulfil the role of King of Hanover under Salic Law, due to the fact that she was a female. Her unpopular Uncle (Ernest Augustus, the Duke of Cumberland) who was the oldest male heir to the throne was sent off to Hanover instead to fulfil the role, and the counters/tokens were produced to commemorate (celebrate) his departure. Such was his unpopularity that many of the tokens on closer inspection actually depict a monkey on horseback which was intended to portray the Duke.

They were produced around the time of Victoria’s ascension to the throne in 1837, and continued to be produced for the next few decades. They were finally made illegal in 1883. 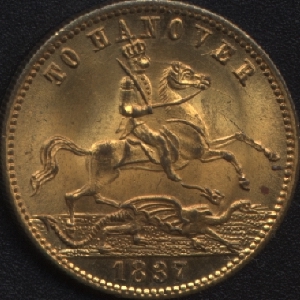