A variety that has needed sorting for a while…however I never managed to find the time to resolve the issue, was the 1823 or 1825 farthing that had a faulty 3 or 5. 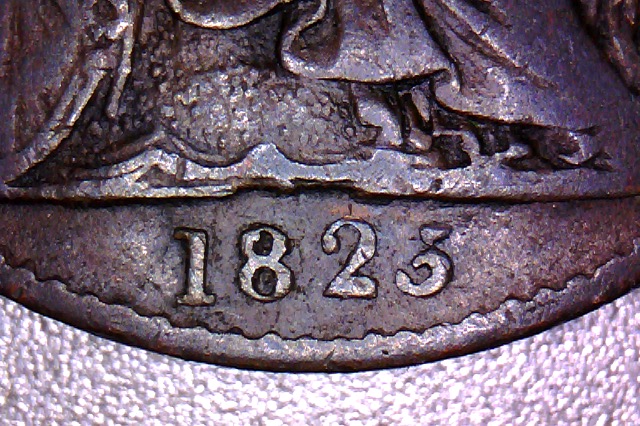 A recent query on the Predecimal forum raised the issue again as another example surfaced. After some careful comparisons, I can confirm that it is without doubt an 1823 farthing. Actually that should be defined as a damaged 3 punch, because the fault does occur on different Reverse dies where the digit is in a different position.

The shape of the bottom loop is a match when compared to an 1823, and the size of the digit is also a factor. The 5 in this series tends to be a bit taller, whereas the horizontal cross bar correctly aligns with the 3.

It is also worth noting that all examples are also Obverse 2, which also ties in with it being an 1823 farthing, although obverse 2 does occur with 1825 farthings, they are quite scarce.

A big thanks to John for raising the query!!

Whilst browsing through farthings and farthing images, it is suprising how many variations in the standard design features are evident when carrying out comparisons, each of which potentially require additional study. A recent example is the Victoria copper farthing series. For a while I have recorded some slight variations in the Reverse types of this series, and noted these features as areas for additional study. Recently I have been contacted by a fellow numismatist and collector David Ayling-Smith, who had also noticed some variations in the design, however David had gone a step further and checked through the series to see whether there were any consistent patterns across the datal range.

Through correspondence, we have now collaborated and combined our findings to compile a set of distinguishing features which can be used with some certainty to distinguish the two Reverse designs. From the images below other unlisted minor differences are also visible, however in my opinion they are not consistent enough to warrant inclusion.

Whether this design change was an intentional re-design or just a routine re-working of the designs is uncertain, but the consistency of our findings does leave me to believe this should now be classified as a new Reverse type.

I urge all collectors to check through their farthings and report back any new combinations encountered, because there is inevitably further study required regarding this subject.

Finally I would like to take the opportunity to thank David for his efforts in relation to this study, and the information he has contributed and shared.

1. Trident shaft separated from thigh on Reverse B

2. Britannia’s facial design has changed, with a “sad” downturned mouth, the cheek bone no longer extends across to the nose on Reverse B

4. A section of Britannia’s plume is missing resulting in a wedge shaped notch being visible on Reverse B (Plume is complete on Reverse A)

5. No flaw is visible along the arm on Reverse B (Only visible on Reverse A from 1841 onwards)

6. Fewer armour scales are clearly defined, although this is only evident on well struck and higher grade examples (vertical columns of scales numbering 1, 2, 3, 2 and 2 are visible on Reverse B instead of 1, 3, 3, 2 and 2 on Reverse A)